A substantial part of the balancing in the last patch has to do with fire and all the “burning” attacks, widely present in the first part of the Nontu storyline.

Fire has the greatest destructive potential in Albedon Wars, as one unit with “burning” status does damage to ALL units in its area at the end of the round.
In addition, several sources of fire damage in the same area stack, further increasing the destructive potential of this type of powers.
However, fire is a double-edged sword, as its damage also affects allies. 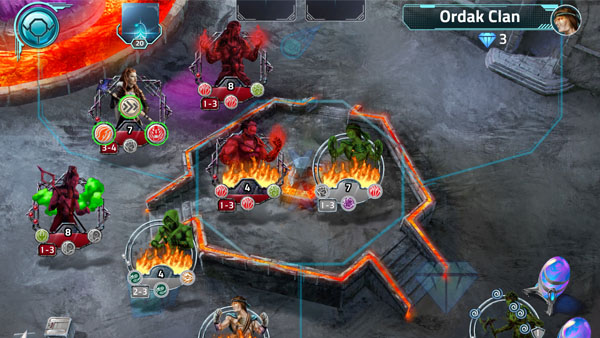 Vuurkan is mostly populated by Ukuba so a lot of companions and enemies in the first part of the Nontu story had Fire immunity.
We decided to turn those immunities into fire resistances in order to make the game experience more enjoyable and avoid situations of potential stalemate.
Immunities are still in the game but only as rare abilities for extremely powerful entities.

Then, using our “standard” value tables for melee and ranged damage and considering the other passive abilities, we adjusted the ranges of these powers a bit, to make them more consistent with the rest of the trees.

Don’t miss the next article, where we will talk about sharp blades and elusive Elhani!